There’s an interesting site I developed a while back for when I was refinancing a mortgage loan.  I’d conceptualized it years ago, but hadn’t actually set aside the time to build it out.  That changed recently.

Embarking on some deep(ish) javascript immersion, I developed LoanGrid.net.  It’s heavy on jQuery, including tabs, sliders, hide/show effects, etc.  But it’s also pretty light on page weight (about 50 Kb if you don’t count the jQuery CDN files that are utilized).  And there are no additional requests to the server once you get the initial page.

For those curious, the basic amortization formula is here on Wikipedia.  I’m just applying that a few dozen times to make the scenario grid, and then calculating a full amortization table for the specific scenario once the inputs stop changing.

I can talk more about some finer points of the technology at some point (e.g. the Revealing Module Pattern for encapsulation), but this is just a generic announcement.  Since this appears to be a somewhat novel approach, I’m more interested in where else such a tool would make sense.

If you have any bright ideas, please share them in the comments.  Thanks!

I recently installed Debian Squeeze (6.0.3) 64-bit, running XFCE.  While using Firefox 9 (and 10), I found that my CUPS printers weren’t showing up in Firefox’s print dialog box.  All I wanted to do was print to PDF! And a nearly identical configuration on my 32-bit Debian Squeeze setup was working just fine.

Running Firefox from the bash command line pointed me in the right direction by generating “ELFCLASS64” errors like the following:

Thanks to some reading, and thanks to Oleg Cherkasov’s comment #22 here, I was able to get it working.  Specifically, the following export just prior to launching Firefox seems to do the trick:

I presume this overrides the default GTK settings by pointing instead to the lib32 GTK. Works for me!

(Mind you, IceWeasel 3.5.x was able to find the printers on its own without this fix.)

I chose not to add this export to my user profile because I wasn’t sure what the broader impacts of the GTK override might be. So nowadays I just launch Firefox from a shell script that does this export immediately prior to kicking off the Firefox executable.

Do you ever have to take a list of values provided in Excel (or raw text) and massage them into a comma-separated list?  I find myself doing this A LOT.  And it usually involves taking a very round-about approach of pasting into a text program and getting creative with find/replace.

Side note: use “^p” in MS Word’s find/replace dialog as code for a carriage return.  “^t” is code for a tab character.  Not ideal, but sometimes MS Word is the closest tool at hand.

Anyway, I’d done that enough, and I decided to write a custom Excel VBA function called “Range2Csv” to comma-delimit a range of cells.  (You can actually use any delimiter you choose; pipes, semi-colons, etc., doesn’t need to be a comma).  It’s not a bullet-proof function, because bullet-proof was not my goal (i.e., it doesn’t conditionally wrap cell values in quotations, and it always removes the delimiter character if it appears in the values, etc).  I already had clean data and just needed to make something work, and this function did the job for my basic use case.

Feel free to make it work for you too.  Suggestions are welcome in the comments below… although I’m not sure put a lot more time into this.  The code is heavily commented so you should be able to customize it yourself.

This post lists simple copy/paste boilerplate jQuery HTML from which to pull <HEAD> entries.  Utilize your choice of CDN from Google, Microsoft, or jQuery.

And if you want some pre-made boilerplate pages to use as starters, try the ones listed in my jQuery CDN Boilerplate Starter Templates post.

Hosted on the Google  CDN:

Hosted on the Microsoft CDN:

Hosted on the jQuery CDN: 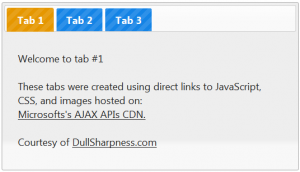 As I’ve stated in previous posts, I’m often forced to use minimalist tools to accomplish a job. In this installment, I challenged myself to deduplicate a list of random numbers (or any values, really) and output just the distinct ones into a new file. It’s very easy in SQL (“Select distinct…”), but there’s a little more to it when DOS is your only option. Not many people will find themselves limited in such a way, but as with many of my posts, this is more about the mental exercise and the application of techniques than it is about the end product.

To see how this works, start with a file that has about 100 lines, each line beginning with a random number between 1 and 50 inclusive. You can generate this list using Microsoft Excel. Enter the formula “=INT(RAND()*50)+1” into cell A1 and copy it down the next 99 rows. Voila: a set of random integers that’s sure to have some duplicates. Copy/paste (or just save) this set into a text file named “UnsortedDupes.txt”.

Drop the following script into a batch file within the same directory as “UnsortedDupes.txt”

@Echo Off REM AUTHOR: www.dullsharpness.com REM Read up on Delayed Variable Expansion in the SET command's help SETLOCAL ENABLEDELAYEDEXPANSION REM Initialize the variable that will hold previous value REM (choose a value that you won't encounter in your list) set prev=bogusvalue REM Pipe the file into a sorter, and for each full sorted line, cast aside REM the lines that match the previous line. for /F %%i in ('type UnsortedDupes.txt ^| sort') Do ( echo PREV1=%prev%, VAL=%%i, PREV2="!prev!" If NOT "!prev!"=="%%i" (echo %%i>> DeDuped.txt) set prev=%%i ) REM Turn off the SETLOCAL settings ENDLOCAL

After you run the batch file, you’ll find that all of your distinct/deduplicated values have been echoed into “DeDuped.txt.”

That’s all for now.

A while back, I discussed a Windows Script Host script for printing elapsed time updates to the terminal screen. It was more a mental exercise for me than something I thought would wow my readers, but a few people found it useful, which I was pleased to learn about in the comments. As mentioned in that previous post, some of the machines I work on everyday are limited in their installed software and in their ability to download the web’s finest utilities, which was the impetus for my creating such a script. But suppose you’re even more of a purist and would like to run such a script using purely DOS? The script in the listing below will do it for you.

One technique worth highlighting here is my use of the poor man’s “SLEEP” command near the bottom, which is mimicked by pinging a bogus IP address. Since DOS has no “sleep” mechanism, leveraging the ping timeout is one way to simulate sleep. Also useful is the technique for extracting hours, minutes, and seconds from the current time variable (see a separate note about that below).

The reason I chose to demonstrate the FOR loop technique in the main script is because it can be applied more universally, such as when the text strings you’re operating on are less predictable, delimited differently, etc.

To be clear, I don’t expect this script to be one that anyone’s clamoring for. Sure, it could be useful. But it was really about the challenge of creating something seemingly simple, yet doing it with a very limited toolset. I’m publishing it primarily because it demonstrates some techniques that others might find useful when also trying to accomplish something seemingly simple using pure DOS.

As always, please leave comments if this is helpful. Enjoy.

Where I work, we run some pretty CPU-intensive reports. Users access the reports by clicking a web link, after which the server queries the hell out of database and then returns a neatly rendered PDF. Recently, we’ve run into some issues whereby the app server reaches its 5-minute timeout before the report server can spit back its PDF. The result is that the user’s session blows up and he has to start from scratch having never seen his report.

So for the last week, we’ve been hacking at a solution for this. The way it usually works throughout the day is the DBAs go and do their DBA thing by tweaking global this-that-or-the-other-parameter, and then they yell over the cubicle wall, “Ok, try it now!” Then one of the application guys clicks the link, starts a stopwatch (if he has one), and watches the clock mindlessly as it approaches the 5-minute session explosion threshold. We haven’t fixed the issue yet.

But since I had a few blocks of 5 minutes, and since I don’t have a stopwatch, I decided to create one with the tools at hand. And my tools were few because:

That pretty much left me with a DOS prompt. But I like a challenge.

The code you see below is the quickest way I could come up with to tackle this. It uses Windows Script Host (WSH). I plan to write a follow-up to this post showing another way, which uses pure DOS.

The gist here is that when you kick this thing off, it’ll begin to spit out elapsed time updates to the console. See here:

Assuming you save this text to a file named “VBSTimer.vbs”, run it using:

Things to note about this script:

Leave a comment if you find any of this useful, and enjoy! 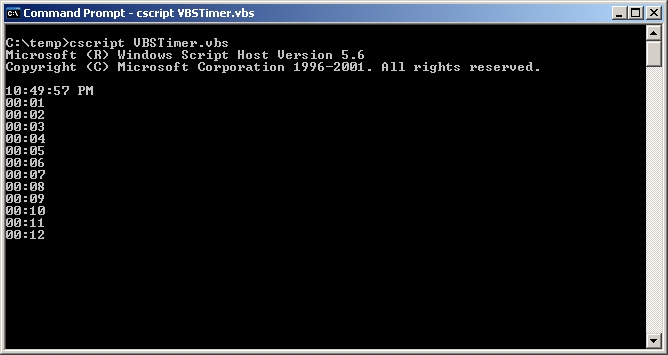